We Present the Winners of the 5th KinoKino Festival! 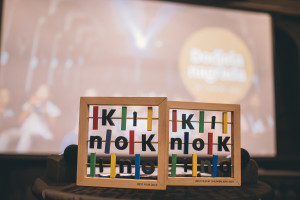 The professional jury consisting of: producer and director Marina Andree Škop, head of the educational programs of Rijeka’s Art Cinema Barbara Zupičić and actor Frano Mašković granted the prize for best film to the Australian film H is for Happiness by director John Sheedy. “In a field of extraordinary and diverse films, the professional jury decided unanimously to give the Best Film Award to a film which warms our hearts and brings us joy, despite the serious topic of loss and grieving. Visually magical and imaginative, this film spreads optimism and happiness in each and every shot, just as its unusual and inspirational heroine does, Candice Phee. This film is an homage to children’s unselfish and limitless optimism and enthusiasm!”, says the professional jury.

A special mention was given to the Dutch children’s film Jackie and Oopjen directed by Annemarie van de Mond with the explanation: “The professional jury awarded a special recognition to this film because it represents a great example of a film for children and youth while being fun and educational. This exciting and easy comedy about the friendship of a girl and a character from a famous Rembrandt painting deftly balances between two worlds, that of the 17 th century and our 21 st century, while opening up new, undiscovered horizons into the world of art.”

The children’s jury consisting of: Petra Bokun, Lun Val Sakoman, Lars Štern, Martin Šamanović and Nora Weygand gave the award to the Austrian film Oskar & Lilli: Where Nobody Knows Us, directed by Arash T. Riahi. In the explanation of the children’s jury stands: “During the last week, we’ve seen six films and we liked all of them, but we want to single out the one which we especially liked. The film is realistic and has a deeper message. It evokes empathy for people who were forced to leave their home and live differently than we do, and who are all around us. Aside from great acting, one of the key elements of the film is music which conveys every important detail.”

The film Oskar &Lilli: Where Nobody Knows Us also won the Audience Award.

You can watch the award-winning films H is for Happiness and Jackie and Oopjen until 11 pm today on the www.kinoeuropa.hr platform.

Due to the epidemiological situation, KinoKino Festival was held entirely online. Thus, all programs, the Competition Program, My First Online Festival, Classic and the workshop program were held on the online platform www.kinoeuropa.hr i.e. on Zoom. Thank you to everyone who followed us and who got involved in the film and workshop programs!